NEW YORK – After having risen 4 percent in April, the GenomeWeb Index turned back down in May, losing nearly 4 percent.

The index underperformed the Dow Jones Industrial Average, the Nasdaq, and the Nasdaq Biotechnology Index, which rose more than 1 percent, fell more than 2 percent, and fell 2 percent, respectively, in May. Performance of individual stocks in the GenomeWeb Index was largely negative last month, as 23 of the 36 stocks saw losses and 13 saw gains.

Fluidigm led the gainers in May with a 16 percent increase in share price, followed by Quidel (+13 percent) and PerkinElmer (+12 percent). Quidel had placed second on the list of decliners in April with a 20 percent loss in share price.

NanoString Technologies led the decliners in May with a 30 percent drop in stock price, followed by Guardant Health and Veracyte with a loss of 22 percent each. NanoString had led the list of gainers in April with a 21 percent increase in share price.

The gainers in May largely benefited from positive first quarter earnings news.

Quidel also reported positive first quarter earnings news in May, as its revenues more than doubled year over year, driven by PCR and rapid antigen COVID-19 tests. Quidel's revenues rose 115 percent to $375.3 million, although the company missed the analysts' estimate for revenues of $400.8 million. The firm said it also saw strong demand for its cardiometabolic immunoassay.

PerkinElmer reported that its first quarter revenues more than doubled year over year, as revenues from its Diagnostics segment spiked sharply. The Waltham, Massachusetts-based firm posted $1.31 billion in total revenues, up from $652.4 million in Q1 2021, beating the consensus Wall Street estimate of $1.21 billion. The company also beat the analyst estimate for earnings per share in Q1.

In mid-May, PerkinElmer also announced it had reached a deal to acquire Nexcelom Bioscience for $260 million in cash. Nexcelom provides tools and instruments for cell counting and analysis, including automated cell counting instruments, image cytometry workstations, assays, cell reagents, and other consumables. PerkinElmer noted that combining the companies' capabilities in drug development would expand its capacity to help academic, government, and biopharmaceutical organizations develop novel therapeutics.

On the side of the decliners, NanoString reported 19 percent year-over-year growth in Q1 revenues, but its bottom line missed analyst estimates, and CEO Brad Gray said the COVID-19 pandemic "continues to impact nCounter utilization," which has resulted in lower consumables pull-through for that platform.

There was no obvious news in May that would have sent Guardant's shares sliding. Early in the month, the firm reported that its Q1 revenues increased 17 percent to $78.7 million, and new data published in Clinical Cancer Research showed that the company's noninvasive and tissue-agnostic test for minimal residual disease detection in colorectal cancer patients has sensitivity and specificity comparable to competitive products in the field.

At the end of the month, however, Guardant sued Natera for false advertising, unfair competition, and unlawful trade practices related to alleged "misleading statements" about Guardant's products for minimal residual disease detection. Natera responded by suing Guardant for using false and misleading claims to deceive clinicians about the performance capabilities of its MRD test, which may have negatively affected Guardant's shares.

Veracyte last month reported that its first quarter revenues rose 18 percent year over year to $36.7 million. However, the company also announced that CEO Bonnie Anderson would be replaced by former Helix CEO Marc Stapley, which may have spooked investors.

William Blair analyst Brian Weinstein wrote in a note that he didn't believe the surprise announcement about Anderson was "an indication about the prospects for the company" or any of its upcoming results. He added that the switch "does not change our belief in the underlying assets at Veracyte and the foundation that has been built," but noted that "this type of abrupt change does add a bit of risk to the story."

He also wrote that the firm's shares are under pressure because of "sector rotation," referring to a movement of investments from one industry to another in anticipation of the next phase of the economic cycle, and added the news about Anderson "will likely not do anything to stem the recent slide, especially because investors did not see this coming at all." 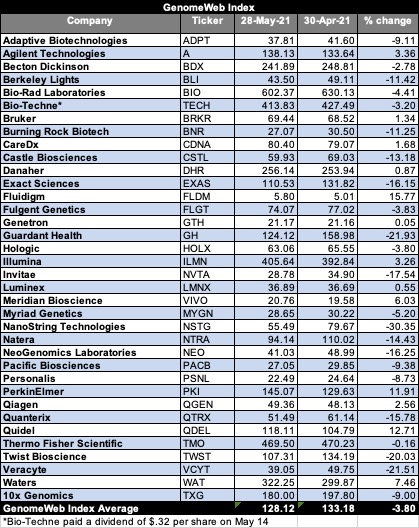