GenomeWeb Index Bucks up in April, as NanoString Technologies Leads With 21 Percent Gain

NEW YORK – After having fallen 3 percent in each of February and March, the GenomeWeb Index swung back up in April, gaining 4 percent.

The index outperformed the Dow Jones Industrial Average and the Nasdaq Biotechnology Index, which both rose nearly 3 percent in April. However, the index did less well than the Nasdaq, which rose 5 percent last month. Performance of individual stocks in the GenomeWeb Index was largely positive last month, as 25 of the 36 stocks saw gains and 11 losses.

GenMark Diagnostics was removed from the Index in April following its $1.8 billion acquisition by Roche in March.

NanoString Technologies led the gainers in April with a 21 percent increase in share price, followed by CareDx (+16 percent) and Luminex (+15 percent).

There was no clear reason for the increase in NanoString's share price over the course of the month, though the company might be benefitting from the current popularity of spatial omics technology, which is at the core of its GeoMx Digital Spatial Profiler technology.

At the end of March, the company said it would begin offering GeoMx Digital Spatial Profiler technology access program grants to at least one startup in each Illumina Accelerator funding cycle, starting with Doloromics, a Dallas-based company working on therapeutics for chronic pain.

More generally, the Advances in Genome Biology and Technology virtual conference earlier in March served as a launchpad for several companies unveiling spatial omics technologies, suggesting that interest in these methods will only intensify as researchers get more ways to generate data, especially at higher resolution.

Luminex's shares rose after DiaSorin announced its plans last month to acquire the company for approximately $1.8 billion in cash. Under the terms of the agreement, Luminex's shareholders will receive $37 for each share of the Austin, Texas-based company. Luminex will merge with a newly formed US subsidiary of DiaSorin.

Regarding the decliners, there was no clear reason for Meridian's drop in share price in April. The only news the company announced last month was that it had submitted a test for the detection of Campylobacter species C. jejuni, C. coli, C. upsaliensis, and C. lari from stool samples to the US Food and Drug Administration for 510(k) clearance. The test runs on Meridian's Curian rapid fluorescent immunoassay instrument.

There was no clear reason for Fulgent's drop in share price as the company hadn't reported any recent news.

Quidel's shares, however, did drop after the company reported some negative news. The firm issued preliminary first quarter earnings on Apr. 23, indicating that although its revenues had more than doubled year over year, the figures had fallen short of estimates and guidance. Quidel attributed this to volatility in SARS-CoV-2 testing and a very light influenza season. 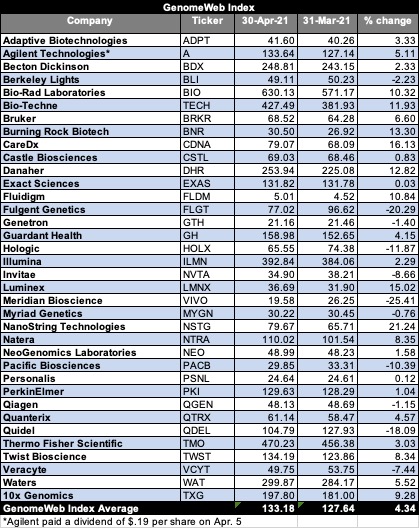 Based on variants from across 21 drug response genes, researchers in The Pharmacogenomics Journal suspect that tumor-only DNA sequences may miss drug response clues found in the germline.

Researchers narrowed in on new and known risk gene candidates with variant profiles for almost 83,500 individuals with breast cancer and 59,199 unaffected controls in Genome Medicine.

Health-Related Quality of Life Gets Boost After Microbiome-Based Treatment for Recurrent C. Diff